Congratulations is in order for all of our

2011 recipients of the Pennsylvania Conference for Social Studies Awards!

We look forward to another award winning year in 2012!

The Tales of the Towpath program introduces elementary school students to mid-19th century life along the Lehigh and Delaware canals in eastern Pennsylvania and helps them understand the canals' and the region’s importance in the growth of the American Industrial Revolution. The unique aspect of Tales of the Towpath is the development of a standardized, interdisciplinary curriculum based on an engaging work of children’s historical fiction.  The book spawns a curriculum that includes period traveling trunks filled with historically accurate artifacts; interdisciplinary lessons written to Pennsylvania academic standards; an audiobook version of “Tales of the Towpath” for low-level and visually impaired students; and a highly interactive website that introduces students to more than 35 towns along the Lehigh and Delaware canals through text, narrations, interactive maps, and historic photos and videos. The website also includes animated geology lessons that explain the formation of coal, iron, limestone, and slate, four natural resources that were at the heart of the American Industrial Revolution. 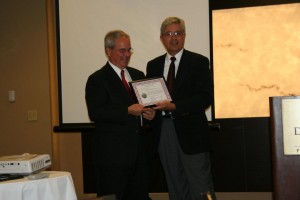 Marc Brasof, "We the School" of Constitution High School

Currently, Marc is a full-time doctorate student and teaches at Temple University in Philadelphia, PA.  Prior to entering into Temple’s Education Leadership and Policy Studies, Marc was a founding history teacher at Constitution High School where he and the staff developed and implemented “We the School”.  He led the movement and became the school government advisor until his recent departure. This program was created to prepare students to become civic leaders by experiencing the successes and challenges of governing at a school level.  Modeled after the federal government, a faculty-student written constitution created a three-branch system in which students and faculty have real decision-making powers. Through processes such as law making, petitioning, town hall meetings, school-wide voting, polls, classroom discussions, elections, and committees, students and faculty found common ground on issues such as the tardy policy, grace periods between classes, public recognition of student achievement, and student and faculty recruitment. 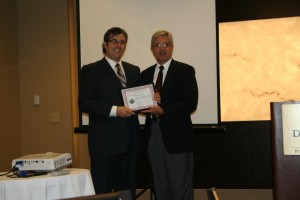 Jim is a teacher at the Corry Area School District, Corry, PA, located in Erie County.  In addition to teaching American History and Government, Jim is Social Studies Department Chairman for the Corry School District, and advisor to History Club.  The History Club, started in 2006, has grown to a membership of 90 students. A major past project was the Constitution Wall, recipient of the Erie County Historical Society Education Award, and the Freedoms Foundation of Valley Forge national champions project award.  Constitution Wall was dedicated in 2009 by the First Lady of Pennsylvania, Judge Marjorie Rendell. The awarded project, titled “Our Journey”, is a compilation of family photos, in black & white, located in the hallway entrance of our district’s Administration Building.  Each History Club member was to bring in 2 or 3 individual family member’s photo or family group photo.  This project ensures that family roots and heritage are not a forgotten and that individuals placed on the wall are honored forever.  This project not only bonds families, but ties the community together. 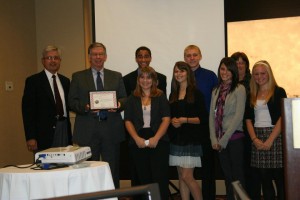 Secondary Teacher of the Year

John is a 7th grade World History teacher on the Team Grizzly at Cedar Crest Middle School in Lebanon, PA. and has been employed at Cedar Crest since 2004. In addition to teaching honors and academic courses, John has been the National History Day school facilitator for the past 7 years and is currently a member of the school’s Life Intervention for Teens (LIFT) program. He is also involved with the school’s drama club, geography bee, and works as a game manager. He is a member of both PCSS and National Council for Social Studies (NCSS). John was also a faculty mentor on the staff of the prestigious Pennsylvania Governor’s School for Teaching Excellence (PGST) at Millersville University for five years.

John was nominated for this PCSS award by Mr. Jon Michael Petricoin, Social Studies Department Head at Cedar Crest Middle School. Mr. Petricoin spoke enthusiastically of Mr. Sowizral by saying that “he shares his heart and his humor freely; his spirit is infectious and inspires the best efforts that the students can muster. It would not be inappropriate to imagine having the immortal Fred Rogers as a classroom teacher. To be in his presence is to be the center of attention and care. As an 8th grade teacher, John is a hard act to follow and memories of his class continue to surface in my own. He is a life changer, whose dedication reminds those around him that we are charged with a great responsibility and limitless potential.” 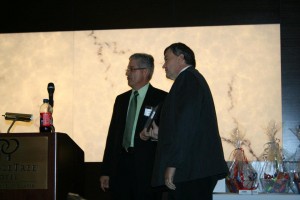 Student Teacher of the Year

During student teaching Jessica taught 10th grade World Cultures, focusing on Asia, and a mixed grade Child Psychology course. Jessica led her students in a project making origami cranes to raise money for Japan to aid recovery of the earthquake that struck in March of 2011. At the project’s end Jessica’s students had raised over $4,000. 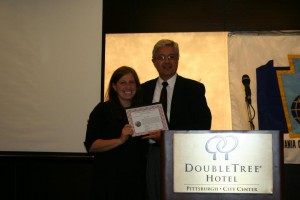 Tim Neff, Director of Education for Soldiers and Sailors

During Tim's 9 year tenure at Soldiers & Sailors, located in Pittsburgh, PA., he has designed and implemented programs for students of all ages including: school tour programs, outreach footlocker programs, Boy and Girl Scout programs and summer history camps. He has facilitated a series of Act 48 Educator Conferences on the American Conflicts attended by hundreds of teachers from around the state and worked with the Curatorial Department at the museum, helping to design and construct new exhibits and manage the museum’s collection. 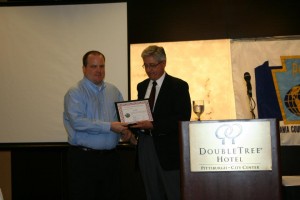 Future Leader of the Year Award

As a 7th grader, Paula has made an incredible impression on her teachers and peers. She epitomizes the idea of good citizenship through her school and community activities. Paula is part of numerous school clubs including: softball, school musicals, SCEAP: An American Landscape, MathCounts, Environthon and National History Day. She is also actively involved in the local 4-H Horse and Pony Club, Ridge Riders and volunteers her time at Waggin’ Tails an animal rescue. Through her work with Waggin’ Tails Paula and her friend organized a supply collection at her school to donate to the rescue. Paula also takes time to raise money for C.A.M.E., a local food cabinet, the Tannersville Volunteer Fire and Ambulance Department, and Habitat for Horses. Beyond her volunteer work, Paula has won several ribbons at the annual West End Fair for her artwork, photographs, scrapbooks, 4-H posters, animal science posters and 4-H workbooks. 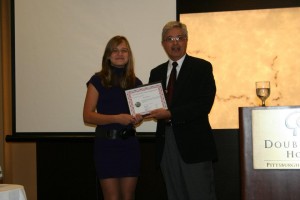 The Monroe County Historical Association’s Education Committee (Joan Groff, Connie McCool, Linda Rodgers, Barbara Braithwaite, and Kathy Boyle) designs programs and activities that link local history to the development of the United States as a nation.  The focus is on using primary sources to create experiences for both teacher and students, use the tools of the historian, interpret the past, draw conclusions based on evidence, and make comparisons with the present.  All student tours, teacher workshops, and in-service presentations are based on state and national academic standards. MCHA has many programs ranging from"A traveling trunk", based on Colonial Stroudsburg, PA., a Fraktur workshop introducing the folk art of Pennsylvania Germans, "Olde Time Fun in the Park" a costumed guided, hands-on tour, and the “One-Stroke Lincoln” workshop for teachers in coordination with Newspapers in Education (NIE). The Association also provides many other inter-disciplinary activities related to topics such as elections. 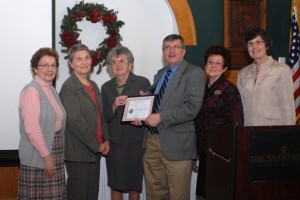 Elementary Teacher(s) of the Year was awarded to Karen Dermes and Esme Santiago of the Gateway School of International Business and World Language in the Reading, PA. School District

Both women piloted a Civic Education Program entitled “Project Citizen”, provided throught the PA Bar Association and Susan Etter. In instituting this program they taught students what it meant to be a citizen and motivated them to want to utilize their privileges as citizens to bring about change. In their own school community, the class focused on adjusting the current dress code policy and gang violence within their district.  Students were required to conduct surveys and interview peers, school board members, and administration. They developed graphs to show data, wrote persuasive letters addressing their opinions and ideas, conducted research, and shared their information with the entire school during an assembly. This project provided students with hands-on, engaging activities to reach a final goal.  Students were able to gain a better understanding of teamwork, having a voice in important decisions, and the effort it takes to make changes that affect a larger population.